I finally have some positive job-related news to share with everyone — I’m officially the new keyboardist for Christ Church United Methodist in Wellesley, Massachusetts. 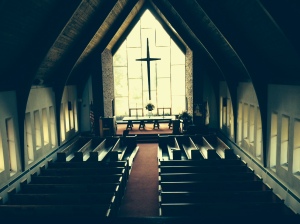 It’s a small, but wonderful, congregation in a beautiful little pocket of New England and I’ve made fast friends with the Rev. Hope Luckie, the pastor, and Jeanne Lucas, the office administrator.  [As a side-note, to be filed under “It’s a Small World After All”:  as soon as Jeanne saw the IU Jacobs School of Music on my resume, she told me she knew Matt Leese, an absolutely marvelous New Zealander I had a huge crush on while in school; she also once competed in a debate tournament with my one-time voice teacher, Chris Burchett; and, as if that weren’t enough, the pastor was once neighbors with the husband of IU oboe professor, Roger Roe.  There really is no hiding in this world.]

Okay, so about the gig:  right now, I’m accompanying the Sunday worship service from the piano, which is totally fine.  I’ve played hymns at the piano for about as long as I can remember.  What I’m really excited about, though, is that I get to use this as an opportunity to finally learn the organ! 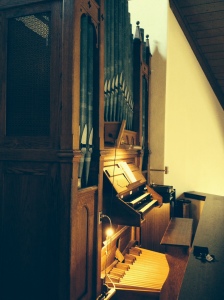 The church has an utterly charming, two-manual pipe organ — only a few stops, so nothing too intimidating, thankfully.  It has a nice sound, and I’m slowly but surely getting a handle on the subtle differences between organ and piano technique (by which I mean, trying to remember that playing harder doesn’t equal playing louder).  The pedals, however, are proving to be a significantly greater challenge. 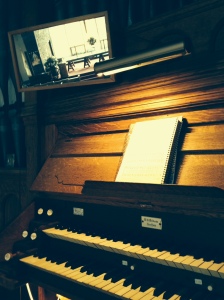 The great part, though, is that I haven’t been this motivated to practice since… well… I honestly don’t know.  College auditions, probably.  I mean, I spent an extra three hours at the church after Sunday’s service just working through exercise in the Flor Peters method book.  And I’m loving it!  It’s actually surprising how geared up I am about this new challenge.

I’m giving myself to the end of the month to start incorporating organ into the service (we’re aiming for All Saints Day).  I obviously won’t be whipping out Virgil Fox’s greatest hits by that point, but I’m hoping to at least manage hymns and, just maybe, a prelude.  We’ll see.

Speaking of Virgil Fox… I have to admit, one of the additional reasons I’m so eager to work at the organ is that it was the primary instrument of my greatest teacher and mentor, Tom Dunn (who studied with both Fox and the equally eminent E. Power Biggs).  Granted, I never got to benefit from Tom’s mastery of the instrument — our musical conversations focused mostly on matters of conducting.  But I still like to think that I am, however tangentially, continuing a part of his legacy.

View all posts by ericandersonjr